And I’m positive it doesn’t even begin to cover the spectrum of situations that may be similar to ours.

But in a time where there’s so many questions, I wanted to do my best to be a voice of calm, of careful consideration, and to show you maybe a different side of the coin: what it’s like to be the parent of a medically complex, technologically dependent, immunocompromised child during a pandemic respiratory illness. Specifically, the novel coronavirus (COVID-19), a new viral strain in the coronavirus family, was recently declared a pandemic by the World Health Organization (WHO).

Kendall has always written her own book. We’ve always said that — as in us her parents, and us her medical support team, “her entourage” if you will. We have gotten her through some incredibly scary illnesses. If you’d like to have a semi-exhaustive list, read the back of a lysol can to see what it kills. The commercial lysol, not the household stuff. Yep. Most of that. In her bloodstream. Trying to kill her at various points throughout her illustrious 11 years here on earth. She actually has two genetic immunodeficiencies. They don’t even have actual names yet because they are so newly discovered and it’s still unknown how to treat them or what they even really mean. They are just called immunodeficiency 15 and immunodeficiency 31.

For most of her life, she has been unable to receive vaccines and instead needed to rely on the “herd immunity” biologically compiled from the donor plasma of 1,000 humans and turned into a magical substance called “Intravenous Immunoglobulin” — IVIG for short. Every month she would sit for eight hours in a clinic room, getting this IVIG delivered to her bloodstream via her central line — an IV directly into her heart.

And it seemed to work! Right up until she’d get another infection in her bloodstream — one that you and I would have easily fought off because we have T-cells and immunoglobulins and retained titers from previous vaccinations and exposures to all the wild and varied germs that we come into contact with every. single. day.

In these battles, she’s up against not only bacteria, but fungus and viral species as well — and it’s taken a toll. She ended up on hemodialysis for a couple weeks in 2018. Among other really crappy circumstances. 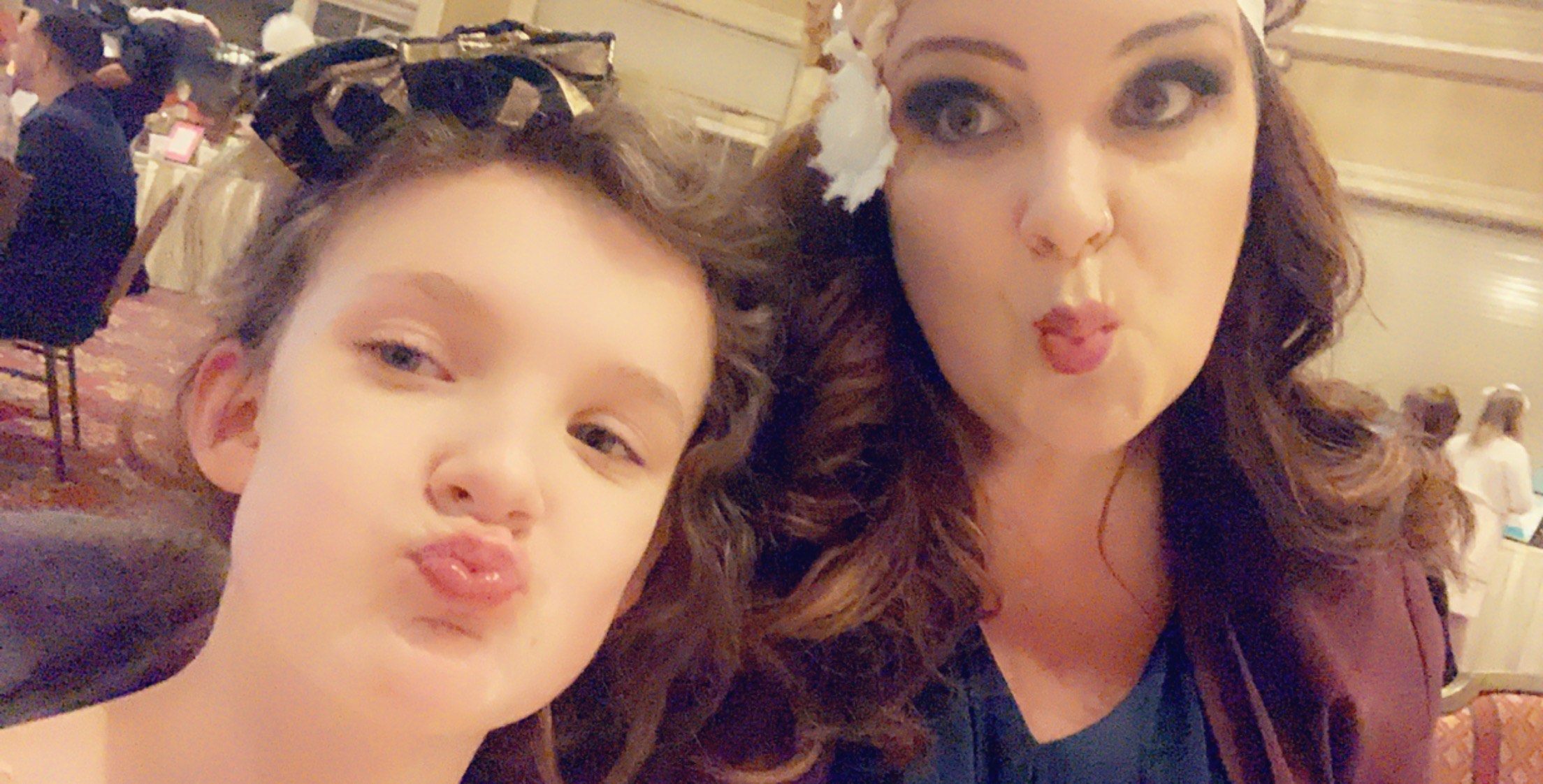 She is — in so many ways — just a regular kid. She loves TikTok, doing “makeup videos,” opening a surprise toy and bugging her sisters. And in so many ways, her life has been altered irrevocably by the times she has had to stare down death and defy it.

I look at her tiny chest at night, criss-crossed by scars of central lines placed and removed, of skin burned by so many adhesives and solvents to remove adhesives, of her harshest scar where purpura fulminans threatened to eat entirely through her tissue. She is a warrior, this fierce, sassy, giggly redhead of mine.

And the thought of her battling a respiratory illness — when she has already lived through unthinkable respiratory stressors so many times in her short life — is the kind of stuff that makes me want to crumple in a pile of weeping emotions.

But that doesn’t help anyone, or anything.

So, here’s what I do instead:

I call our medical supply store to request an extra shipment of whatever supplies we may need. It may sound simple but dealing with this is about as fun and easy as dealing with the IRS, so it takes more than a few days. More like weeks. Imploring the nice lady on the other end to please just find a way to send a couple extra nasal cannulas or a few more g/j tube extensions so I can feed her.

I reinforce to my older three girls that any and I mean any symptoms need to be reported to me immediately so I can make informed decisions.

I watch as my ever-present and completely necessary stock of hand sanitizer dwindles. And I know this is it. It’s gonna be a while til I can get more. This scares me, but I cannot give in to that fear.

I drill our in-home nurses about their exposures and knowledge and back up plans.

And I do my best to remain calm. Like a duck. Gliding across the surface of the pond effortlessly — while paddling furiously underneath the murky waters of the unknown.

To be fair, it isn’t so much the COVID-19 itself that worries me. I have learned a ridiculous amount of microbiology in the last 11 years and all of that knowledge leads me to understand, on a basic level at least, that the virus itself isn’t “that bad” in the spectrum of viral illnesses. Mainly mild symptoms for most people who have had it, at least here in the U.S.

It is the fallout that I fear.

A hospital that is full of people who don’t understand what constitutes a respiratory emergency and what equals “stay the hell home and hydrate.” Have you ever been in a full ER? I’m sure you have. It’s chaos. Have you ever been in a full hospital? It’s not fun. Lying on a cot in a hallway while pandemonium swirls around you, alarms going off every which way, trying to move a child on a hospital bed who also needs five other IV poles and machines to move with her… Those are the images that wake me up in cold sweats when I think of what this pandemic might come to.

I found toilet paper on clearance yesterday at the store. I thought it was relatively ironic given the images of empty shelves that I’ve seen… that in the biggest push for TP this country has probably ever seen, someone thought “these rolls? Nah. Get rid of them. Mark them 50% off.” I gladly bought them. But I didn’t buy all of them. I bought what I thought we would need for the next few weeks. And I left some for other families like mine who just might need some TP.

And I guess if I could say anything that might get through to anyone it would be that. Get what you need — and think of others too.

I know this can be a really scary time and thing for so many of us. Because it is. The unknown is always scary. But the unknown is not always bad. It isn’t always a worst-case scenario. Sometimes the unknown can be…“huh! well that wasn’t so bad!” and it can be “look at what we survived! Go us!”

I implore you to find a way to replace fear with love.

Be protective for sure.

But take a deep breath. Just for a few seconds.

We can get through this.

We will get through this.

And I guess if I had to ask anything of you as you read this, it would be:

Find and hold onto your humanity. It’s the most sacred part of life we can hold onto.

As you go through the infuriating restrictions that are being placed on us, and the heartbreaking cancellations that you get no say in, I challenge you to instead think of how this may end up having an even better outcome. I realize that’s slightly Pollyanna of me, but try it. I promise you that at least trying to think of a positive scenario outcome feels a ton better than bitterness over something that’s already said and done.

Yes, there will be sacrifices and frustrations and questions and fears and probably even a slight bit of chaos over the next few weeks. And I get it — it will suck. For us? That’s the kind of chaos we have lived with ever since our favorite ball of chaos came into this world. And we’ve learned that what it does is force you to see some of the real stuff of life.

It forces you to appreciate the feel of sunshine on your face in the warm spring breeze.

Go stock up on whatever you think you might need. Get your favorite carbs, pull out the old DVD collections and card games, and get ready for life to look a little different for a few weeks.

But don’t, for one second, forget what it’s all about.

Life is a gift. And maybe the next few weeks or months will start to feel like a pair of brown wool socks that your Aunt Edna got you for Christmas when you were 8. But it’s still a gift.

Breathe deep and enjoy it.

Thank you for coming to my Ted Talk.

Terra Atkinson is a life coach who has blogged her life as the mom of 4 girls, including the many struggles and triumphs of her youngest daughter’s journey with mitochondrial disease, and how they’ve all learned to “keep on keepin on”- connect with her at terratalking.com or on Facebook.

This article was originally published on themighty.com.