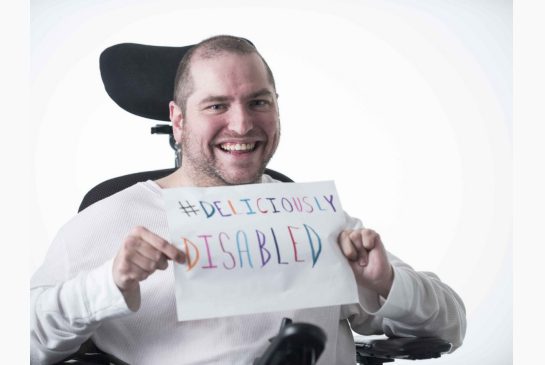 Everybody deserves to get it on, say disability rights activists planning an accessible sex party.

“Hey, we’re here and many of us enjoy sex just like everybody else,” said Stella Palikarova, an activist and academic who studies disability and accessibility issues at the University of Toronto.

The 35-year-old is in a wheelchair because of her spinal muscular atrophy, but that doesn’t mean that her desire for sex, and more importantly, human connection, is any less strong.

“I think that it’s important that people realize that sexual expression is a human right,” she said. “We need to start having this dialogue and bringing down the stereotypes.”

Palikarova is partnering with Oasis Aqualounge, a downtown Toronto sex club, to throw an accessible sex party where everybody can take part in the fun. Fatima Mechtab, the club’s marketing director and a friend of Palikarova, said the club is accessible to almost anyone, with any desire, at anytime, except for one key factor:

“It’s not wheelchair accessible,” she said. So last year, Mechtab and Palikarova started to scheme about ways they could bring the friskiness to people who have mobility issues. In January, they started looking at venues that were accessible that would allow sex and nudity, but were turned away time and again.

“We don’t think we can hold that kind of party at this venue,” she was told.

“Some of the secrets to that is having a really sexy environment,” Mechtab said.

Guests can don masks, watch a burlesque performance or attend a toy workshop. The sex part is optional, a happy bonus for anyone willing to get down. Mechtab said they’re looking for aid support workers to volunteer to help make sexy-times possible for those who need physical help.

Although the venue can hold 150 standing, mobility devices take up additional room, so they’re holding 25 spots for people with wheelchairs as well as 40 for able-bodied people.

“We’ve definitely wanted to make it wide-open and inclusive for everyone,” Palikarova said.

Andrew Morrison-Gurza, one of the event’s organizers and a disability consultant, helped inspire the name of the event. Born with cerebral palsy, he said he started using the hashtag #deliciouslydisabled as a way to talk about disability in a positive way.

“We don’t have a language currently to discuss disability in a way that is sexy,” he said. This can lead to awkwardness in the bedroom, which is one of the main reasons why Morrison-Gurza is so keen on the August event.

“I am quite a sexual person, but getting access to that can be difficult,” he said.

“The biggest thing we’re trying to accomplish is to raise awareness in a fun and sexy way,” he said.

For starters, many popular bars and clubs in the city are woefully inaccessible, which severely limits the places disabled people can go to socialize. And when it’s time to take it to the bedroom, Morrison-Gurza said that it can be tough to talk about physical limitations and desires with a partner.

“I think that there’s a lot of fear around sex and disability, and the fear can take away from the fun,” he said.

Morrison-Gurza said too often, people are afraid to touch people in wheelchairs because they are afraid of hurting them or don’t believe that they have libidos. Before he has sex with a new partner, they “storyboard” the sex, which means they work out what they want to do, what they can safely do and what kind of help they may need.

While Morrison-Gurza and Palikarova are both looking forward to the evening, they say the party is about more than a good time — it’s about making people realize that disabled people have the same wants and desires as everyone else, and deserve the same opportunities.

“I’d love to see more events like this,” Palikarova said. “Making this the standard, not the exception.”

She hopes the sex party will get people outside the disability community to think about the barriers that some people face, and about how, at the end of the day, we all just want the same thing: love.

“This is really going to take the co-operation of everyone in society,” she said.