People with Disabilities Power Up Hockey! 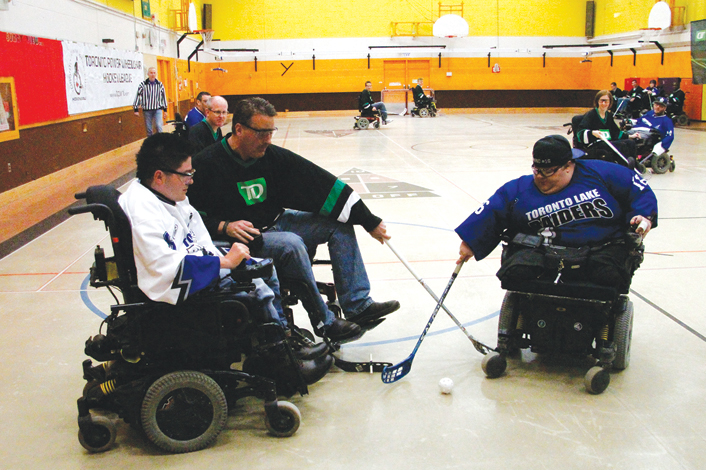 Talk about taking the national sport and making it electric!

A team of TD executives recently experienced a motorized perspective on the game of hockey as they faced off against the Toronto Lake Raiders in a power wheelchair hockey game.

It was an action-packed afternoon during which the blue-and-white Lake Raiders edged a green-clad Team TD 3-1. With dozens of boisterous supporters equipped with clappers and accompanied by some loud music, the school gymnasium looked and sounded much like a pro arena — only more affordable!

The Lake Raiders play in the Toronto Power Wheelchair Hockey League (TPWHL). Established in 2006, the TPWHL is a nationally recognized, non-profit organization. Its mission is to provide quality recreational and social programs for Canadians with disabilities. In addition to winning on the floor, the Lake Raiders received a surprise $10,000 donation from TD, which will allow the team to take part in the North American Power Hockey Cup Tournament in St. Paul, Minn. this summer. The donation was timely, since the team had qualified for the tourney, but did not have sufficient funds to attend.

“We had a lot of fun! The TD executives did a great job,” said Kirk Ashman, Sales Administrator at TD Asset Management, who played power wheelchair hockey for 20 years before coaching Team TD at the event. “As a proud TD employee, it was great to see the donation because it’s very difficult to raise the money to participate in tournaments. It was a great feeling.”

The joint TPWHL-TD event was organized by volunteers from TD Insurance and TD’s Canada-wide Persons With Disabilities (PWD) Steering Committee, chaired by Paul Clark, who was also in attendance as a fan.

“We’re on a journey to becoming a disability-confident organization and we’ve made some great strides. We’re working each day to be a place where every employee and customer is valued, respected and supported.” – Paul Clark, Chair of TD’s People With Disabilities Committee

“I am touched by how warm and welcoming the team and the Toronto Power Wheelchair Hockey League were right from the beginning,” said Eric Jodoin, VP, TD Insurance and a member of the PWD Steering Committee. “We felt like part of the family and from start to finish had a blast. I’m confident that with this successful event we’ll be able to reach our goal of raising awareness for people with disabilities.”

Michael McGee, SVP, TD Auto Finance, agreed. “It was an awesome experience, and much harder than it looks! The competition was tough. The Toronto Lake Raiders are a great team.”

The Toronto Lake Raiders are an experienced and talented team, made up of players who share a passion for hockey, which clearly unites Canadians whether it’s played on ice or on a gym floor.

“I love how we are showing everyone that we can play sports like everyone else, just differently,” says Lake Raiders forward Mike Iacovone. “This event has been great for inclusivity. Today was about feeling equal, not different.”

Morgan Dumas is a Toronto-based freelance writer, social media and communications professional. She writes for print and digital media about events, historical profiles, fashion and real estate. As a member of the Persons With Disabilities community, Morgan has a special interest in related issues.