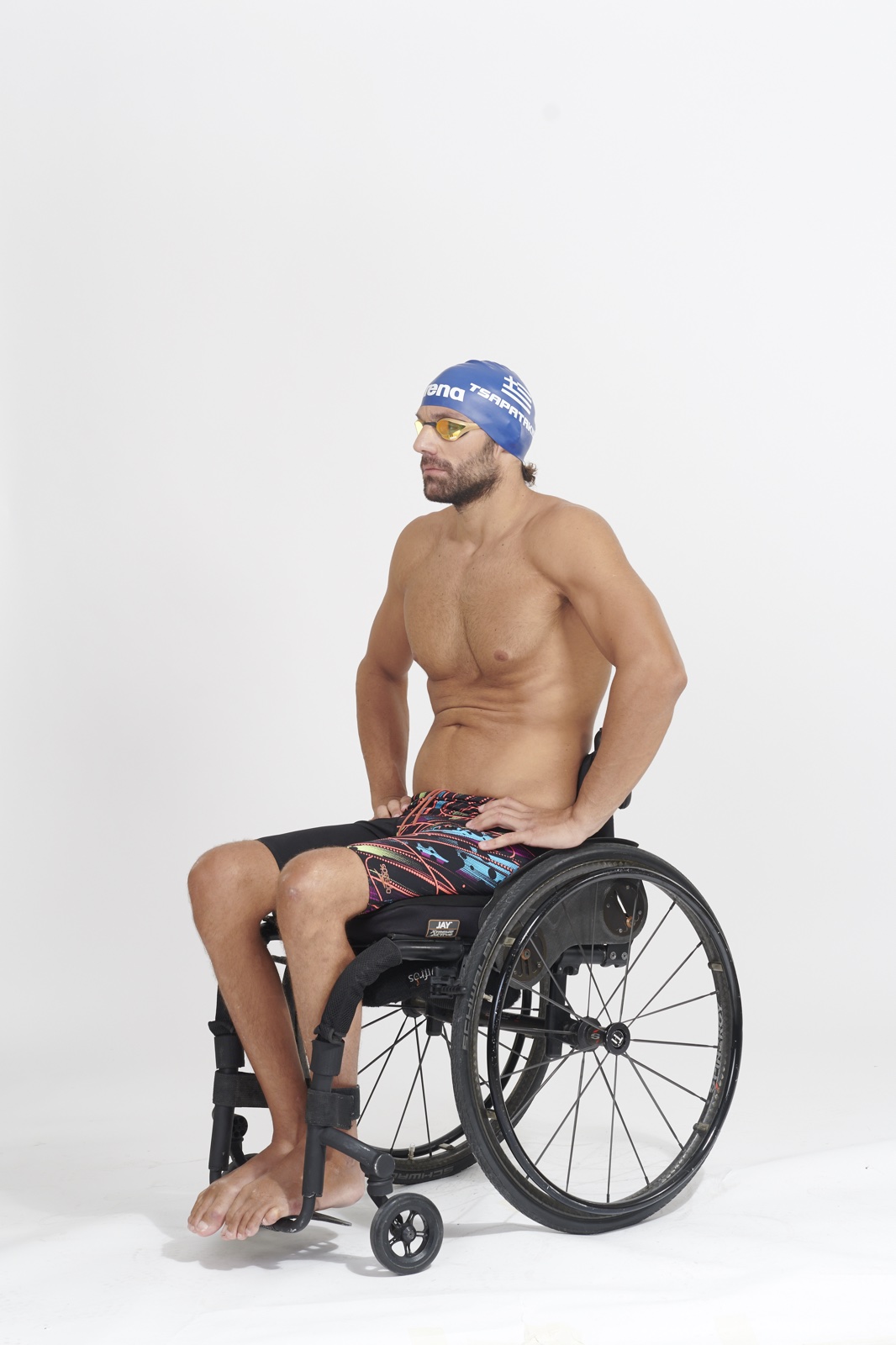 The idea came to me from out of nowhere. I was engaged in a photo collaboration with a swimming academy in Thessaloniki and waiting for a meeting to begin. There was a young man race training in the pool. I was astounded then, by his relationship with the water and his powerful athletic strokes.

On that day, curious as usual, I took the man’s coach aside, only to learn that the swimmer was none other than world champion and Paralympic medalist Antonis Tsapatakis, who was preparing for the upcoming Tokyo summer games. I’d heard of him via the press and silently admired him from afar for his stami- na and sporting success but, in person, he was suddenly formidable. Even dripping wet he exuded positive energy. He was strong, confident and charming, and clearly in magnificent shape.

As an underwater photographer who is used to swimming and diving in the Aegean Sea for a living, I could tell that Antonis was passionate and born for the water…his aquaticity was excellent and his apnea remarkable. “Would Antonis consent to me photographing him in the water, his natural environment?” I asked. Affirmative! We arranged to meet and I described what I had in mind. Would he model under- water? The images I had planned would create a strong impact for viewers. They would make people stop and think. I wanted the images to share a lot without a single word being spoken.

The concept was not only to reveal the obvious gravity-less freedom Antonis feels underwater, but also the subliminal healing power of water for both the body and soul. In addition, I wanted to show obstacles being pushed out of the way and, on a more spiritual level, the feeling of equality that the water can bring with its weightlessness. My purpose was to present what I saw in Antonis—a determined man who fights and wins not only in the swimming pool, but also in real life.

The shot we wanted

Thankfully, he was excited about my proposal and we arranged the photo shoot right away.

The photos had to be taken twice because the academy pool where Antonis usually worked wasn’t deep enough for us to gracefully execute the concept. A quick switch to the Kalamaria Municipal Swimming Pool gave us the depth that we wanted and put us back on track in short order.

I have to admit to being quite nervous that morning. It was my first time directing and shooting underwater with a man who lived with mobility-related disability. My worries were very quickly overcome, however, thanks to my model’s comfort and relaxed relationship with both himself and the water. I was also grateful also for the help of my coworkers, who took care to keep Antonis safe during the process and provide him with air during breaks.

The photography session took several hours, both in preparation and in the pool. The work was split into two pieces. The first showed Antonis in casual clothes of his choosing, while the second showed him in his swimwear. With the former, my goal was to create a portrait of the swimmer in his day-to-day life—a man you would meet on a stroll or sitting next to you in a cafe. I wanted to create my photographs under the water where Antonis was as he felt internally—a powerful, accomplished, fit young man. In this environment, I felt I could simultaneously highlight Antonis’s charm, and
the lion’s power that his character exudes. I was desperate to capture his determination, his goals, his willpower and the faith that drives him forward.

The set of images made real “noise” in Greece when they were published on social media, and over the following weeks they went viral with an incredible number of repostings and shares. I believe that the momentum and optimism of the scene immediately resonated with people who knew, and didn’t know, the swimmer. Moving messages came in from around the globe that have encouraged Antonis in his preparations for the upcoming summer games and pushed me to keep creating and sharing the energy of human and marine life in all its glory.

To this day, it gives me great joy that the message and emotion I had hoped to deliver through this photo series was felt and understood by the thousands of people who saw it.

During our shoot, I experienced first-hand Antonis’s beautiful Cretan madness and invincible will-power. He constantly emitted positive energy and optimism… Truly the kind of person you want to have in your life. 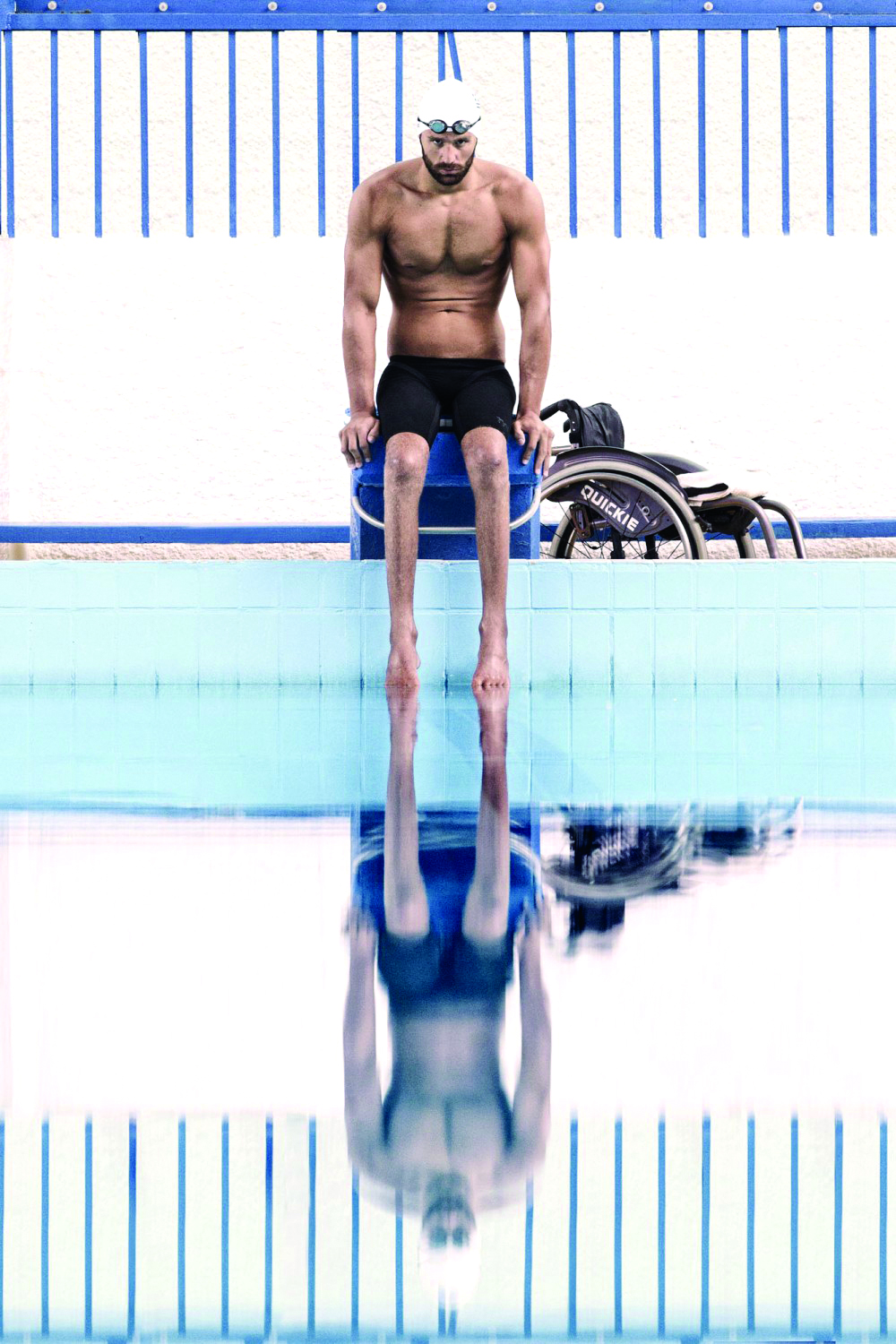 Antonis Tsapatakis grew up in Chania, Crete. When he was only five, he started swimming and as a young teen became a respected polo athlete. He became a T8-9 paraplegic after he was thrown off his motorcycle onto pavement and endured
a spinal cord injury. He was 19 at the time and enrolled at the Hellenic Police Academy.

Less than 9 months after becoming paralyzed, Tsapatakis was back in the pool and quickly began to start swimming competitively with the Megalonissos team. He claims that what drove him back to swimming was, “his need of independence and becoming active again.” Today, the world champ competes in the 100-metre breaststroke SB4 classification, and is a veteran on the Greek Paralympic team.

He has won 20 gold, silver and bronze medals at various international competitions. He tells us he’s going for gold in Tokyo later this year.

Nicholas Samaras is an award- winning underwater photographer who believes that a person can turn the world upside down, improve, develop new talent, and tackle any challenge. His photos of Antonis Tsapatakis are part of a three- portrait collection that, he says, is one of the most important projects he’s worked on to date. underwater-photography.gr