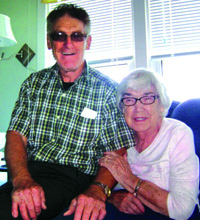 We’re pleased to announce the winners of the 2014 Canada Cares Awards. Check out their stories and our regional award winners over the next few days. We invite you to share your congratulations and feedback. A special thank you to everyone who entered the coast to coast and to our judges and committee members. When their son Caleb was two Donalda and her husband Richard were told to prepare for his early death due to a rare brain disease. He is now almost 18 years old. Donalda has stayed firmly and faithfully by his side – keeping him at home despite recommendations for long-term care, and teaching him a few words although they were told he would never speak. Donalda and Richard have also raised three other children, each with special needs of their own. They’ve had only six nights away in 17 years. Additionally, Donald advocates for individuals with disabilities on the health board, sharing her wisdom, strength and perseverance with her community and beyond.

Giving of his time and financial support is not unusual for Errol Gallant, who purchased and renovated a convent as a home for village seniors in 2008. He continues to work there, without having received a paycheque for the past five years. His nominator tells us that he is often at the home for long hours and has become friends with each one of his residents, treating them as if they were his own parents. He runs errands for them, takes them to appointments and visits them in hospital when necessary. Errol’s energy is endless and his commitment to care is beyond generous. The seniors of Villa Marguerite are extremely fortunate to have him on their side.