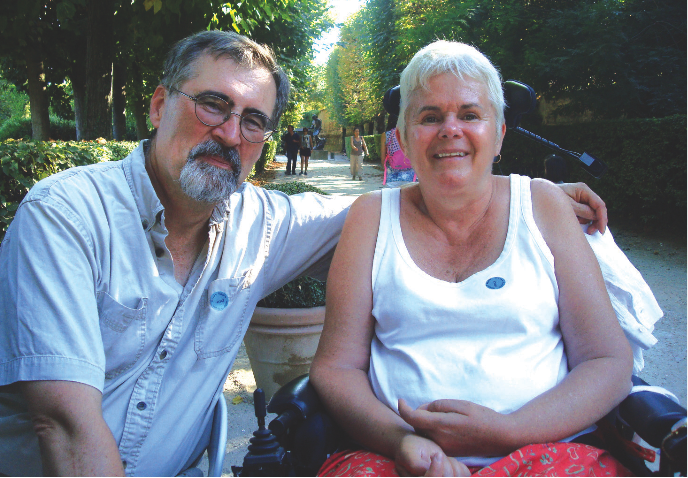 AFTER BOUNCING and bumping over cobblestones from London to St. Ives and then Canterbury in my power wheelchair this fall, it was a pleasant surprise to reach Bath and discover that our spa was completely accessible. Thermal pools, including a rooftop pool with stunning views of Bath Abbey, all had lifts into the water. My sore muscles were treated to a two-hour soak and an aromatherapy massage. I felt like the pampered Roman goddess Sulis Minerva, for whom this city was named.

In many ways, Bath typifies how far England has come in making this tradition-bound country accessible. Since my last trip to England 23 years ago—when I rode in the baggage car on the train—services and facilities have improved significantly. Many of the old buildings have ramps and lifts or both, and sightseeing and city buses, as well as a number of taxis, are accessible. Now, through the newly instituted National Accessible Scheme (NAS), visitors can
find accessible services to suit their needs. The demand is certainly there: In 2009, almost half a million people with disabilities or health conditions visited England with their companions. And according to VisitEngland.org, the national tourist board of England, they spend over £2 billion (about $3.5 billion) a year.

I had decided to take my electric wheelchair because I didn’t want my husband pushing me everywhere for two weeks, although I was anxious about how I would fare. I didn’t regret this decision; it gave me the freedom I wanted, despite the cobblestones. No trip is without its problems, however, and we had a few. On arrival at the St. Pancras railway terminal in London, the driver of the black cab that pulled up wouldn’t take my wheelchair. He said it would break his ramp—even though the weight limit clearly printed on the ramp was 300 kilograms, and my chair with me weighs approximately 180 kilograms. And on departure, when we had to take a bus to catch the Heathrow Express to the airport, the bus driver refused to let me board the bus because a woman with a baby stroller was using the space. We ended up taking an expensive taxi. (A wheelchair user who took First Bus Group in Yorkshire to court and won an unlawful discrimination suit recently challenged this policy.)

Visitors to England should note that black cabs do not have lowered floors, thus increasing the steepness of the ramp and putting the wheelchair passenger higher than the other seats, which means less visibility. Black cabs are better suited to manual wheelchair users, as the space behind the driver’s seat and the passenger seat is quite small, making for difficult maneuvering. The Mercedes black cab is slightly larger.
In London, we stayed at the London School of Economics Grosvenor student residence. Right next to Covent Garden and the theatre district, it proved ideal. Although our room was basic, it was large, with a roll-in shower, and cooking facilities are available.

Getting around London is relatively easy since most streets have curb cuts, and we took public buses everywhere. For an overview of the city, we took a ‘hop-on-hop-off’ bus that accommodates wheelchairs. An
excellent way to see the sights, it’s best to buy a two- or three-day pass so you can stop and explore the attraction you want to see and then get back on the next bus to finish your journey. Note: Most London museums and galleries are accessible, sometimes through a side entrance, and they admit wheelchair users for free, with companions paying half-price or going for free.

Four days later, we walked/rolled to Paddington railway station, where we boarded the First Great Western—the Cornish Riviera express—for the five-hour trip to Cornwall. (Travellers who need ramps or assistance boarding the train should call 24 hours in advance of travel. If you are not sure on which railway you are travelling, check online. Rail cards are available only to UK residents with disabilities, but tourists with disabilities and their travel companions are eligible for 1/3 off “anytime” day tickets, although sometimes it may be cheaper to buy an undiscounted Off-Peak or Advance ticket. Whatever you decide, remembers that rail travel in England is expensive and complicated to figure out, so it pays to check and then check again.)?

Speeding across the low-lying Somerset Hills was a relaxing way to see the countryside. As we came into sight of the sea, the bustle of London seemed far away. The hotel in St. Ives that we had selected according to the National Access Scheme was full by the time we got around to booking it, so instead we stayed at a B&B near there. St. Ives is a salt-
encrusted barnacle of a town with a picture-book harbour that has bewitched generations of painters. Crying seagulls and the bagpipes of the St. Ives September Festival serenading us through the cobbled lanes completed the picture-perfect English Riviera.

Although I was warned, “St. Ives is not accessible,” the walkway by the sea is paved, and the cobblestones and steep hills were no problem for my electric chair. Few of the shops were accessible, but we found that the Tate art gallery, the Barbara Hepworth sculpture garden and some restaurants had ramps. Our day trip was sunny, with bathers (even a beach wheelchair) and surfers enjoying the weather. And at a local pub, Captain Roy entertained us with stories of his 90-foot fishing boat, which had served at Dunkirk and even helped to sink a U-boat during the war.
When it came time to leave, we learned too late that accessible taxis are difficult to find away from the major centres. The taxi driver who had obligingly taken us into St. Ives was not prepared to come back and take us to the train station, nor was the other accessible taxi company, so we ended up incurring a hefty bill and much wasted time on the phone trying to find a taxi to our next train stop. “Welcome to the world of disability,” I said to B&B host Sally Jones after she volunteered a frustrating hour trying to help us. Eventually, a Penzance taxi came through. (Wheelchair users who are considering a stay in Cornwall would be well advised to stay in a larger place such as Penzance, and take a day trip into St. Ives.)
Boarding the train to Canterbury in Kent, we were caught short on arrival because the ramps were delayed even though we had prearranged this with the train. Once the ramps finally came, we walked/rolled into town to Canterbury Cathedral Lodge, which is located right beside the Cathedral and owned by the diocese. Our room was small but with a roll-in shower. I’ll never forget lying in bed looking out our bay window at the soaring towers of the Cathedral, one
of the largest in England. It is an important pilgrimage centre, linked with the murder of its most famous Archbishop, Thomas Becket, in 1170. It has good access. Be sure and take in the choral every day at 5:30 p.m. except Sunday. As in London, Cornwall and Bath, the guided walking tours led by locals are excellent.

Although castles in Kent have varying degrees of accessibility, you can’t visit this area without experiencing one or two. We took a tour of Leeds and Dover castles with Jane Martin of Tours of the Realm. She had never taken a person in a wheelchair, but found an accessible taxi to drive us around for the day. It was expensive but well worth it. Jane arranged everything, including lunch at a restaurant overlooking the White Cliffs of Dover. Leeds Castle, with its strange mix of owners from Henry VIII to an Anglo-American heiress, is set on an island surrounded by a moat and beautiful gardens.

It has a wheelchair transport vehicle and accessible toilets, and there is a stairlift elevator and video for the inaccessible floors. After touring the gardens, we headed to medieval Dover Castle, much more rustic and not quite as accessible. More interesting than the castle, however, were the secret tunnels and hospital deep underground that were used during World War II to plan the evacuation of Allied troops from France. These were all accessible, including the tram between the castle and the tunnels. Interestingly, although the town of Dover was heavily bombed during the war, the castle escaped damage (our guide said this was because Hitler wanted it for himself after the war). A multimedia event, complete with sound, projected Operation Dynamo on the walls of the tunnels. That was a dramatic end to a peaceful visit to this beautiful island. I’m certainly glad that the advances in accessibility mean my days of travelling in a train’s baggage car are over!

Some accommodation sponsored by
VisitEngland.org.

Lynn Atkinson-Boutette has been writing on travel for people with disabilities for
the past 20 years. She is former editor of “We’re Accessible-News for Disabled Travelers. She has had multiple sclerosis for over 40 years. As well as travel writing, she also writes poetry and has been published
in several journals