Autistic Senior Left Out Of Graduation 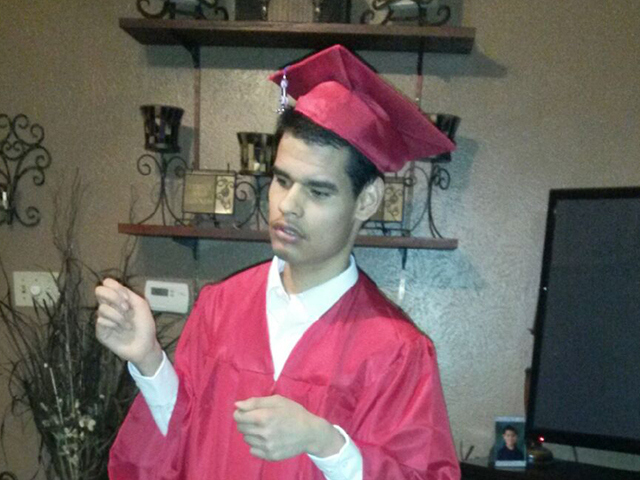 Sam Houston High School senior Julian Nanez did not walk with the class of 2015.

His mother believes he was intentionally left out, and says she did not even know about the situation until hours before the ceremony began. “I called one of his teachers and she basically told me that he wasn’t going to walk,” said Maria Nanez. “Basically, she said she didn’t have faith in him.”

Julian is a special needs student. He will remain in school until he is 21 years old. But, as a high school senior, he would have had a chance to walk with the class of 2015.

Julian had attended graduation rehearsal. His mother says there was even a plan in place for graduation day — his brother would walk with him. But the family said that the student never got a chance.

“I had family and I had friends there. They were waiting to see him,” explained his mother. She said that Julian did not come home with any graduation tickets after the rehearsal.

Nanez said that she thinks her son may have been fussy during graduation rehearsal. But that she did not get any indication from her son’s teachers that plans had changed until the day of the ceremony. Julian’s name was not on the program.

“They didn’t call his name or nothing,” said Maria Nanez.

“There was an error in the proofing process, and several students were mistakenly left out of the program,” said Leslie Johnston, Arlington Independent School District  communications director.

Johnston says that there was a miscommunication that happened.

“We had a series of communications, phone calls, messages. Unfortunately, a misunderstanding about a meeting location prior to the ceremony prevented him from being able to participate.”

Though Julian may not understand what happened, his mother said that this right of passage would have meant so much to her family. “Just to see him walk, I just wanted the opportunity for him,” Nanez said.

The school principal has reached out, apologized and is working to resolve the issue, Nanez added. There are plans for her son to walk a year from now, with the class of 2016.