Her Skin’s Made Her a Star! 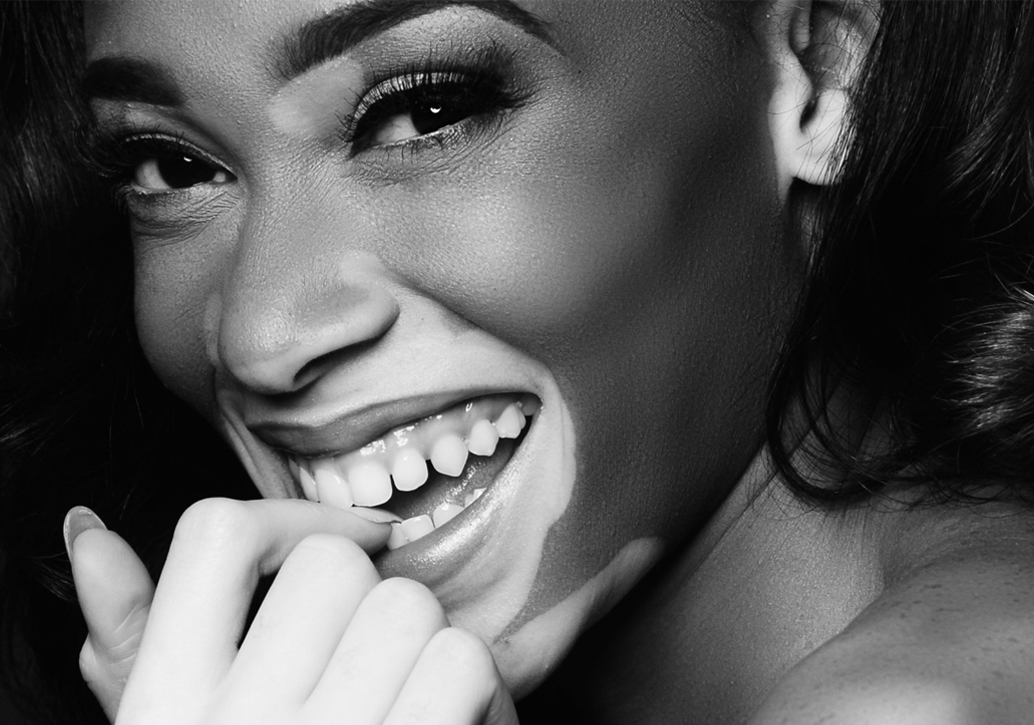 By Franchesca Ramsey. "It was really hard growing up. I had to grow thick. People make fun of you and you have to learn how to deal or you break down. I'm not trying to break down so, I have to deal."

She was teased because of her skin. Now her skin’s made her a star!

Winnie Harlow grew up with endless teasing and name calling. The insult of choice? “Zebra.”

As a toddler, Winnie Harlow looked like every other happy kid. But at around 4 years old, Winnie’s skin slowly started to change.

Gradually, patches of color on Winnie’s arms, legs, and face began to fade from brown to pale pink. Winnie soon learned her changing skin was a result of vitiligo. Vitiligo is a skin condition that causes skin to lose its pigment. And, as Winnie’s skin changed, the teasing started, almost right on cue. Taunts of “cow” and “zebra” followed Winnie through the halls, but she was determined to keep her head up.

“It was really hard growing up. I had to grow thick. People make fun of you and you have to learn how to deal or you break down. I’m not trying to break down so, I have to deal.”— Winnie Harlow

Vitiligo tends to come with invasive questions and stares, but Winnie’s comfortable in her skin.

Whether they’re asking if it’s painful or contagious, Winnie has no problem fielding questions with a dose of honesty and humor.

“It’s just a skin condition. It doesn’t hurt. There’s nothing wrong with me. I’m well. You can breathe the same air as me. We’re cool.” — Winnie Harlow

What’s even more impressive is that technically Winnie could “fix” her skin if she really wanted to. There are treatments that would completely lighten her skin so she’d be all one color, or she could use special makeup to cover her spots. But she’s not interested. Even if you aren’t religious, it’s pretty inspiring to hear someone fully accept who they are. In 2011, Winnie sat down for “Vitiligo: A Skin Condition Not A Life Changer,” where she shared her dreams of someday having her own talk show or working for a magazine. Now, just a few short years later, it’s safe to say she’s pretty much blown those dreams right out of the water. Can you say supermodel?

These days Winnie can be found strutting down runways and gracing major fashion campaigns where her skin has her standing out.

As the brand ambassador for Desigual, Winnie’s face can be seen pretty much everywhere.

Here’s one of my favorite photos of Winnie. To think that kids made fun of this?! Forget, “cow.” This woman is a work of art. Look at how perfectly symmetrical each spot is! She’s flawless.

But Winnie isn’t just a model. For millions of children and adults with vitiligo, she’s also a hero.

Winnie’s Instagram is filled with magazine spreads, behind-the-scenes photos, and tons of fan art. But those posts are nothing compared to the messages and photos from fans who’ve found the strength to love themselves because of Winnie.

According to the American Vitiligo Foundation, about 1-2% of the global population has vitiligo. And while that doesn’t sound like much, that’s still millions of people. Millions of people who aren’t used to seeing themselves represented in the media, much less represented as something beautiful. This adorable message from the mother of one Winnie’s young fans proves how important her supermodel status is for young kids growing up with vitiligo:

My heart is officially melting.

Winnie’s not the only model whose skin is breaking down barriers. Shaun Ross and Diandra Forrest also prove beauty comes in many shades.

If you don’t know Diandra Forrest and Shaun Ross by name (or from hanging out with Beyoncé), you might know them as fashion’s first albino supermodels.

But Shaun and Diandra aren’t just albino, they’re African-American albinos. So, of course, that adds a whole ‘nother level of, “Wait, you’re black but you’re not black!? Whaaaa?” ridiculousness.

And just like Winnie, Diandra and Shaun have both dealt with bullying. Diandra even shared in her interview for the Albinism Awareness Campaign that it wasn’t just kids. Adults would stare and make comments about her too. For Shaun, it wasn’t just being called names, like “powder” and “white bread”; one bullying incident ended in violence, with a classmate stabbing him six times! Today Shaun and Diandra serve as inspirations for anyone who’s ever felt ashamed of their differences.

“I think it’s important for all children with albinism to know they are beautiful. They’re not any different than anyone else. … I always wanted to start something like this just because, growing up, I know that I would love to have had someone who’s older around that had albinism … just to motivate me and that would understand some of the things that I was going through and help me through them.” — Diandra Forrest

Models like Winnie, Shaun, and Diandra are showing the world that the things that make us different also make us beautiful and that’s something all of us could stand to remember.

You don’t need vitiligo or albinism to appreciate what these incredible models have been able to achieve. Sadly, too many of us have dealt with bullying or being made to feel less than because we’re different. But the real beauty is in recognizing that we are all unique and that our differences are worth embracing and celebrating.

Thank goodness there are role models like Winnie, Shaun, and Diandra out there to remind us how important it is to work whatever it is you’ve got.

PreviousBetter than the Gym
Next4 Big Signs of PTSD