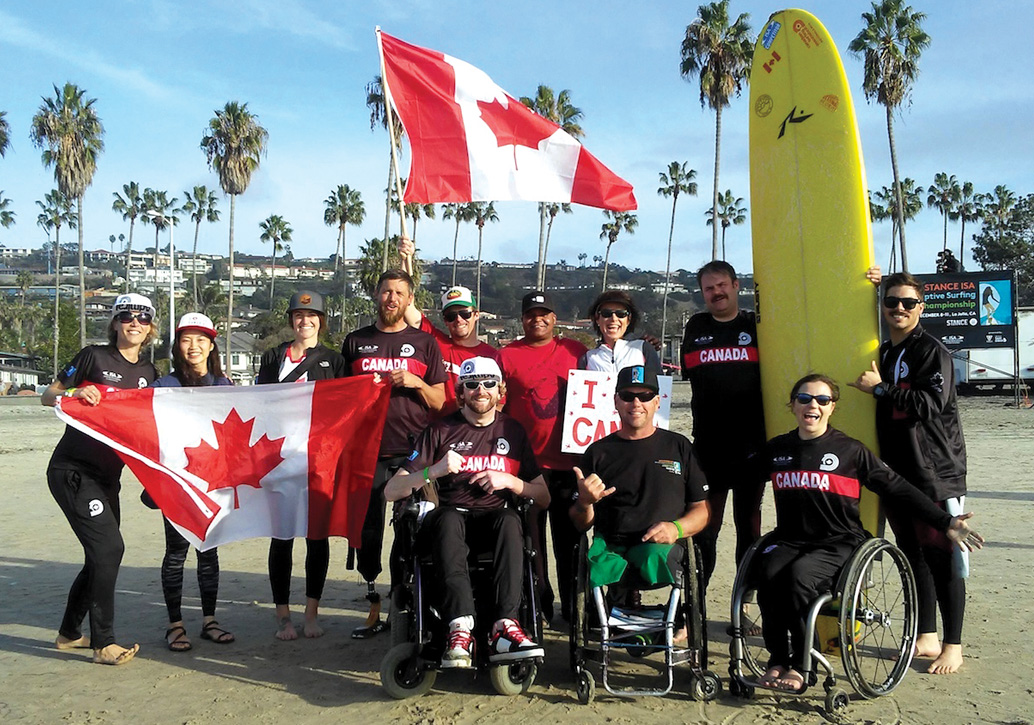 Canada rode a wave into the adaptive surfing world in California, and it was my privilege to be with the first Canadian adaptive surf team to compete in the World Adaptive Surfing Championship.

Canada rode a wave into the adaptive surfing world last December in California, and it was my privilege to be with the first Canadian adaptive surf team to compete in the World Adaptive Surfing Championship. I keep a picture of the team on my computer at work to remind me that anything is possible.

The International Surfing Association (ISA) hosted the second annual competition, with each participating country allowed a maximum of eight athletes in different categories: four surfers who could take the waves in a standing or kneeing position, one who needed assistance in the water, one who could catch the wave from a seated position with a paddle (wave ski), one who could surf in a prone position and one with vision loss.

Four fierce warriors with unshakable determination and a history of a work or snowboarding accident formed our first Canadian adaptive surfing delegation. Nathan Smids from Ontario, a below-knee amputee who surfs standing with a prosthesis, made it to the quarter-finals. Daniel Shoemaker from Banff, who is also part of the Canadian para-snowboarding team, was another standing surfer. Victoria Feige from Vancouver, who has an incomplete spinal cord injury, was catching waves in a kneeing position. And, after competing in four Paralympic Games in three different sports, Scott Patterson, a double leg amputee from Vancouver, was our final kneeling competitor.

California dreaming
Four years ago, I found out about AmpSurf’s adaptive surfing clinics. A not-for-profit organization based out of California, AmpSurf gave me the chance to teach people with a physical disability how to catch their first wave! By the end of September 2015, I found myself flying to San Diego as a volunteer for the first-ever World Adaptive Surfing Championship. But, to my dismay, there wasn’t a single surfer representing Canada.

Back home in Quebec, I contacted the Canadian Surfing Association (now CSA Surf Canada) to see how I might get started building a team. I will always remember the association’s president Dom Domic’s response to my passionate request for his help in developing adaptive surfing in Canada: “That’s really, really awesome.”

Not long after he put me in contact with Gerry Burns, a life enthusiast who has used a wheelchair since a hockey accident. He is a surfer who lives in Vancouver, and shared my enthusiasm for developing the sport. That was the beginning of the Canadian Adaptive Surfing Committee. Three people—Dom, Gerry and myself—with three different backgrounds, all sharing an interest in making the most beautiful sport in the world more accessible.

Despite the backwash
It took us more than a year and lots of volunteer time to prepare a team. It wasn’t easy, given our lack of time and resources, funding limitations and the little surprises and challenges that arose along the way. For example, understanding how our athletes should be classified for international competition was a difficult task at first. Sure, the categorization was clear for some surfers, but for others with different capabilities, we had to do some research and get good guidance from the ISA.

Nonetheless we prevailed, and all of the earlier problems were forgotten once we arrived at the event site! The whole experience was amazing. It was also a bit daunting and somewhat intense seeing Team Canada together for the first time, and guiding everyone through registration, the symposium, management meetings, surfing clinics, the opening ceremony, three full days of competition and the closing ceremony.

Most of all, I loved watching surfers from all over the world competing on the waves and talking like old friends when on dry land. And what can I say about all the invitations we had to go surfing around the globe? It was an experience I’ll never forget. Team Canada finished 11th out of 22 countries. Since it was the World Championships, we can say that Canada has the 11th best adaptive surfing team in the world! No matter the ranking, the important part is that we were there and we’re building our reputation. The team had lots of fun and, once again, we’ve proved that it is possible for a person who has experienced a major life-changing event to become involved in a competitive sport that they love.

Pascale Martineau is a kinesiologist who works at a physical rehabilitation centre in Quebec City. She enjoys all sports, but has had a major addiction to surfing since catching her fist wave in Tofino 10 years ago. She volunteers with CSA Surf Canada to help develop adaptive surfing.