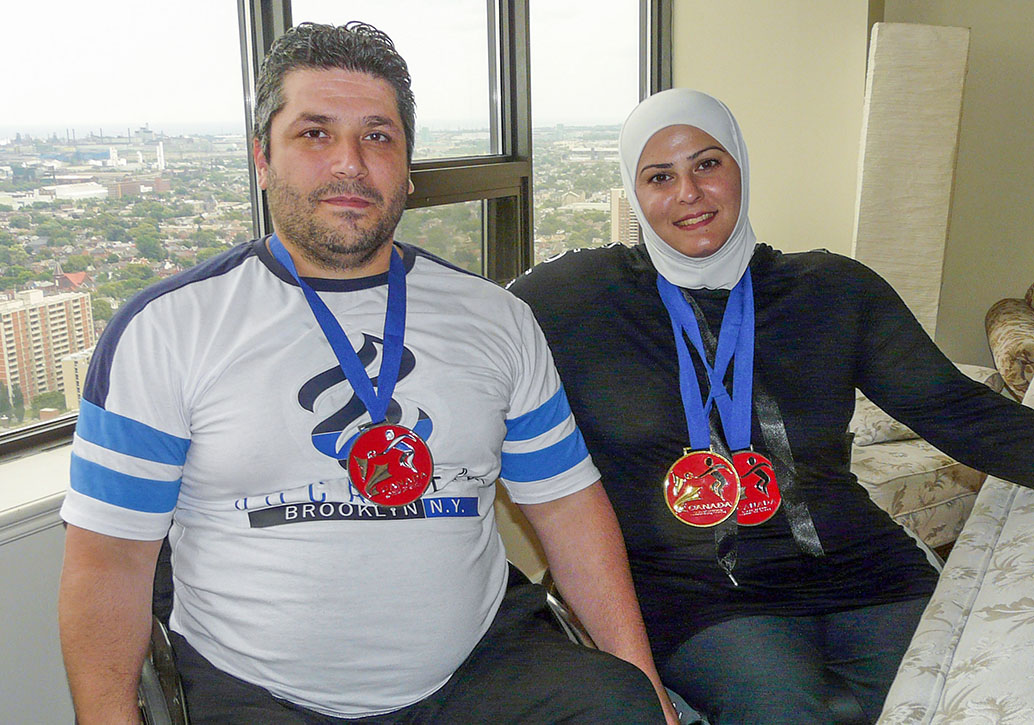 A new start in Canada

A new start in Canada

Dima Al-Dahouk frowns fiercely as she whacks the Ping-Pong ball across the net. She maintains a laser-sharp focus on the ball as it careens back and forth on the table. Her husband, who is her regular opponent, slams it into a corner. She wrenches her wheelchair around. Her right arm slashes the ball, sending it spinning wildly to the other side.  He misses. Dima breaks into a triumphant grin. She yells.  “Yessssss!!”

Dima takes the game of table tennis seriously.  Not surprising, considering that the Syrian-Canadian has dominated the sport internationally and athletics have given her far more than just medals. “In my society, the image of a disabled person is that he or she is nothing,” she claims.  “I proved them wrong.”

She was paralyzed at age three, after a doctor accidentally pierced her spinal cord during a procedure that followed an injury from a car accident. Dima grew up in a small Syrian town and suggests it was tough being a child with a disability. Even her parents were not supportive. “My mother and father told me I couldn’t do anything and they didn’t get me a wheelchair until after my 10th birthday.” Life without the ability the move around independently meant that after school, young Dima was usually alone, and her only respite was, watching soccer matches on television. Over time the young girl’s situation worsened as she realized that her countrymen agreed with her parents’ views.  “Society believed I couldn’t work, play sports, or even start a family,” she says.

By the time she reached adolescence and graduated from high school, Dima was struggling, convinced of her worthlessness, and contemplating suicide.  Her father had denied her his permission to attend university and threatened to kick her out of the house if she insisted.

Desperate for a new challenge, she defied him, mustered the courage to leave home, and moved to the capital, Damascus. There, she began working as an administrative assistant and started her lifelong love affair with athletics when a friend invited her to attend a gym for athletes with a disability.

The president of the club took one look at her wide shoulders and muscular arms, and recommended weight lifting. On her first try Dima hoisted 50 kgs in the chest press. A week later she won gold in a local power-lifting tournament and after that she continued training for at least 6 hours a day. Her morale gradually improved along with her physical strength and agility. “When you start making progress, you stop thinking about negative things, your confidence and ambition grows, and you begin looking forward,” she suggests.  “As you win you start to feel better and dream bigger.”

After a few years of weight lifting, Al-Dahouk switched her sporting focus to ping-pong.  And, in over a decade, she rose to become an international Para table tennis champion.

Her quick reflexes, ability to strategize on the spot and her upper body strength made her a natural. “Ping pong needs 200% concentration – when I’m throwing ahead.  After all, I’m calculating in one second how the person will send the ball back to me,” she says. One of the benefits of ping-pong is that it leaves no time to think about her problems, she says.

Sports gave Al-Dahouk another, unexpected gift – her husband. While she found him attractive, however, her first impression of Ousama Juha, a Para basketball player, was not favorable.  She thought him somewhat self-absorbed but she changed her mind quickly as she realized he was simply shy. As they got to know each other, Dima recalls, “he became my coach because he understood what worked for me, and gave me suitable moves”. He also gave her the kind of encouragement she had never had before. “He was always motivating me – even when I didn’t want to exercise.” The two married a few years later.

The outbreak of war in their homeland forced the couple to flee to Turkey in 2015. There Al-Dahouk and Juha began volunteering with war victims, many of whom had lost their limbs from bombing. “It’s very difficult in Turkey – there is no money, no support, and people with disabilities are rejected by society,” she says. The couple introduced theatre programs and also helped clients try new sports, “We were examples. We showed them we were able to work hard to achieve things and rise up through athletics,” she says.

In 2017 Canada approved Al-Dahouk and Juha’s claims for asylum, and the couple, along with their two sons, came to Canada and settled in Hamilton.  And while Al-Dahouk is very grateful for the safe haven, she misses the rigorous training regime she had at her club in Syria. She tries to keep fit through exercise, and has even taught her husband how to play ping-pong so she can stay in practice.

In July 2017 Dima was a competitor in the Butterfly Canadian Championships, (a national table tennis tournament), where she scored both a gold in the doubles and a silver in singles. Al-Dahouk is keen to win more prizes for her adopted country, and hopes to become a medal-winning Canadian Paralympic Champion. “Getting a medal for Canada would be a small token of my appreciation,” she says.

But more than anything else, Al-Dahouk wants to continue inspiring others treading in her shoes.  She has met at least ten refugees with recent disabilities acquired through war – these range from leg amputations to visual impairment. “Sadly there is no gym for their specific needs,” she says, and dreams of opening one.

She believes sports are essential for anyone facing a challenge. “Sports give you strength and emotional support, and make you feel better about yourself,” she says.

The couple’s ping-pong game is over quickly.  Juha is no match for the table tennis superstar. He is routed and concedes the game. She gloats – just a little. “I always win.”

And according to their private deal, that means he has to do the dishes tonight. Again.

The Syrian-Canadian Foundation, a volunteer-driven non-profit organization empowering Syrian newcomers, is committed to helping Al-Dahouk achieve her goal. The group has mounted a crowd-funding campaign to raise money towards her training and equipment costs. (www.launchgood.com/dema)

PreviousThe Invisible Battle
NextFYI – What You Need To Know – Fall 2018